Cases: A reoperation is considered as potentially avoidable if it is related to an anatomic site opened or manipulated during the index intervention, and it is unplanned at the time of the index operation, and it reflects a surgical failure or a complication due to surgery rather than the worsening of the underlying disease. 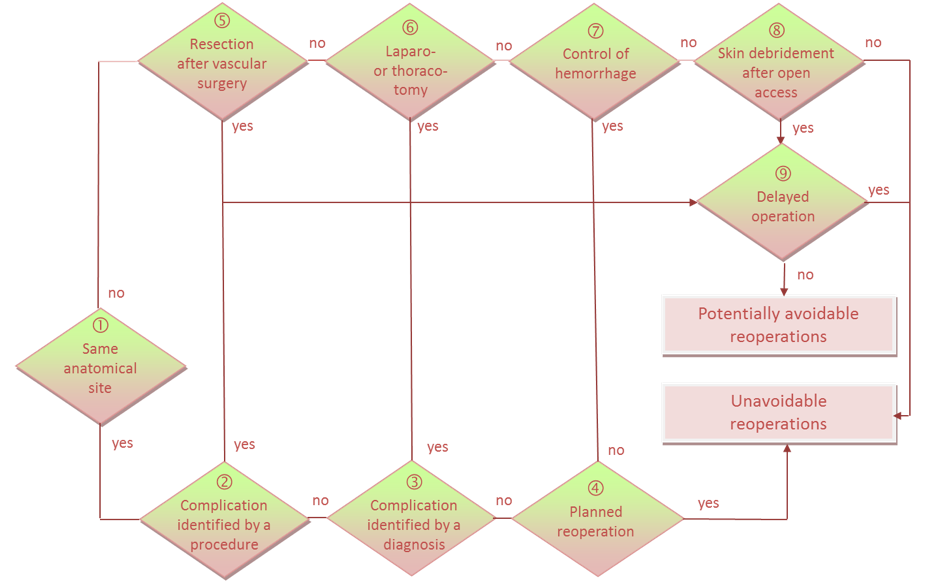 Only reoperations performed during the same hospitalization are considered; they are screened through a computerized algorithm.

Eligible operations: All therapeutic surgical operations (i.e. operations that include at least one surgical intervention with breaking of skin or mucous membrane). Punctures and injections are not considered surgical. A therapeutic operation must include at least one non-diagnostic procedure (a simple biopsy is not eligible). Psychiatric, geriatric and rehabilitations units are excluded if they are assigned to Swiss statistics codes M500, M900, M950, M990 (only if the average length of stay exceed 10 days). Hospital stays are also excluded if they are candidates for one day surgery, to ensure the comparability among hospitals having made – or not – the shift towards outpatient surgery.

Interpretation: A potentially avoidable reoperation corresponds to a reopening of the anatomical site, which was not foreseen at the moment of the previous operation (called index operation). There are many possible causes of reoperations, some of them being often avoidable (***, see below), other sometimes avoidable (**), and other mostly unavoidable (*). These causes can be established through the Review tool from data from the medical statistics or by more detailed data from medical and operating reports.

A. Complications of previous operation:
A1. Surgical wound infection ***
A2.Haemorrhage or postoperative hematoma ***
A3. Organ laceration or forgetting a foreign object ***
A4. Mechanical complication ***
A5. Leakage of anastomosis ***
A6. Rupture of fascia without bleeding or infection ***
A7. Postoperative fistula **
A8. Thrombosis, occlusion or stenosis of a vessel **
A9. Stenosis of a non-vascular surgical site **
A10. Peritoneal adhesion *
A11. Compartment syndrome *
A12. Other complication ***

B.  Ineffective surgery:
B1. Incomplete processing ***
B2. Calculated risk of choosing a less invasive operation *
B3. Relapse or aggravation of underlying disease *
B4. Permanent implantation of a device after temporary installation, not initially planned *
B5. Mishandled operation ***
B6. Other reason **

Strength of the indicator: The tool screens unexpected reoperations, excluding reoperations not related to previous operations or occurring through a normal sequence of multiple operations. A majority of reoperations are due to the quality of surgery, such as surgical wound infection, hemorrhage or postoperative hematoma, organ laceration, mechanical complications, incomplete treatment. Too high reoperations rate might also be explained by the hospital context (preventive antibiotic treatment, check lists, less invasive techniques, etc.). The indicator is based only on routinely available data and take into account the case mix, with highly discriminant expected rates modelling.

Limitations: A first limitation is related to the specificity of the screening with about 15-25% of false positives (reoperations considered as foreseen by the surgeons after analysis of detailed medical records). For instance, surgeons might firth attempt a less invasive operation, knowing that there is a high risk of a second more aggressive operation. However, if such sequences are too frequent, it might still highlight a problem in the indication of the right surgical technique.

The indicator detects only reoperations occurring on another calendar day, missing reoperations due to immediate post-operative hemorrhage for instance. The tool was initially developed to take into account such direct reoperations, but the exact time of the operations is not provided yet in the Swiss medical statistics.