Aim: Measure the evolution of health status with:

Healing: The evolution of the health status is estimated by how costs vary over time. If costs are decreasing after a costly care phase, we can assume that the situation improves.

Pejoration: A cost increase during an episode of illness represents a pejoration.

Stagnation: Sometimes, the costs are stable over time: 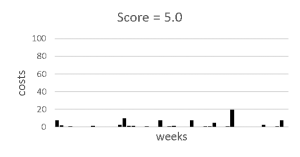 This method assumes that costs have been allocated by disease episode and by week (cost accounting).

More details are discussed in here.

Strength of the Indicator: The result is independent of the total cost of a disease and on the duration of the episodes and can be applied to all types of illnesses (acute, malignant, recurrent, or chronic evolution). It reflects the dependence to health services. Even if the health system cannot cure a disease, the aim of health care is to provide autonomy to patients. Healing scores vary strongly from a disease to another and by age, rendering possible to compute expected values for each disease and patient.

Limitations: Sometimes, health care is not provided because it does not significantly change prognosis or the natural evolution of a disease. In such situations, it can nevertheless happens that the patient receives palliative and/or supportive care. Expected values are computed by disease, age, and gender, but the severity of illness cannot be measured from routinely available data. Another shortcoming is the low discrimination between average results among physicians with similar patients.